This browser is not actively supported anymore. For the best passle experience, we strongly recommend you upgrade your browser.
Get In Touch
All Posts Subscribe
October 9, 2021 | 2 minutes read

Steinmo teaches us that structures mould policy because they set the way we think.

Reading books about the taxation structures of the world is something that strange people like tax partners often do, with little reason other than interest simply for their own enlightenment. Once in a while though, the dry tedium of the subject is illuminated by a well written book with a meaningful message that touches on topics and global events that are both known to the reader but also of interest. Taxation & Democracy by Sven Steinmo is one of those books.

Steinmo sets out to chart the modern taxation history of three western democracies and examine the way in which their structures have influenced their tax policy. His main thesis is that facts like constitutional arrangements which make coalitions a norm are likely to impact on tax policy as much as the individual desires of the people involved. It is a blow against the theory of "great men" and a position known as Historical Institutionalism. Steinmo does a very good job of explaining why it is that the British, Swedish and American traditions and models of taxation are as they are.

Much of what we tax lawyers discuss in our modern lives is detailed here. But it’s not just dry charts; Steinmo points out some historical oddities. For example, the US (a nation perceive as low tax) has, historically, had higher corporation tax rates than Sweden (a famously high tax nation) for much of the relevant period, but the US's taxation system of reliefs and special allowances means that its effective rate is much lower in almost all cases, but it requires action to get those reliefs. That can be seen as the origin of the more laissez faire American approach to tax structuring. Taking advantage of tax code structures is common in America, it isn't in Sweden. Steinmo seeks to explain that that (amongst other things) is shaped by the constitutional structures of checks and balances in the US system, a system which contrasts with the Swedish system which has been led by one party for much of its post war history. Could you imagine the prospective leader of any country other than the US answering accusations of tax avoidance with "that makes me smart" and surviving? For Steinmo, that event is explicable by the structures in the institutions that have moulded that behaviour.

This book is Steinmo's central work and whilst now over 25 years old it still speaks to us about how our structures work and how they influence our behaviour. He has written much more, and I would recommend anything with his name on it.

Comparing three quite different political democracies―Sweden, Britain, and the United States―the book provides a powerful account of the ways these democracies have managed to finance their welfare programs despite widespread public resistance to taxes. 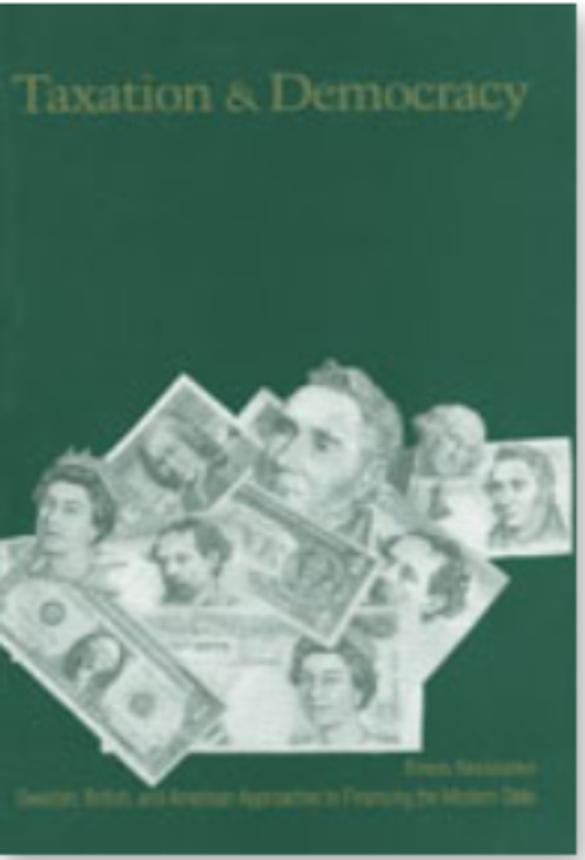