This browser is not actively supported anymore. For the best passle experience, we strongly recommend you upgrade your browser.
Get In Touch
All Posts Subscribe
June 29, 2020 | 1 minute read

This resume is centred on Hassans’ Partner and tax specialist, Grahame Jackson’s webinar on Exit Tax - which is the first of a four-part series of webinars focusing on changes to tax in relation to Gibraltar.

The harmonisation of the international tax landscape stems from the global implementation of measures such as Exit Tax to combat tax avoidance. Exit Tax was introduced in Gibraltar on the 30 January 2020 as a result of the EU Anti-Tax Avoidance Directive (“ATAD II”) (Council Directive (EU) 2016/1164) and the OECD’s Multilateral Convention to Implement Tax Treaty Related Measures to Prevent Base Erosion and Profit Shifting (“BEPS”).

Grahame Jackson describes the implementation of Exit Tax as a ‘radical departure for Gibraltar’ as although there is no capital gains tax in Gibraltar, there are now circumstances where tax is payable as a result of capital growth.

In Gibraltar, Exit Tax only applies to taxpayers as defined in the Income Tax Act 2010; an ordinarily resident company which has assessible income under the provisions of the Income Tax Act or a permanent establishment of such company resident in another European Union Member State or third country. Exit Tax taxes all accrued by unrealised gains on an asset for the period of a company is residence in the jurisdiction. It ensures that tax cannot be avoided merely by relocating tax residence or where a taxpayer puts assets beyond Gibraltar’s taxing powers.

Where assets generate Gibraltar assessable income, the rate of charge will be 10% of the market value of the assets less their value for tax purposes. In limited circumstances, a taxpayer may defer payment of an exit tax by paying it in instalments over a period of five years. However, if there is a ‘demonstrable and actual risk of non-recovery’, the Commissioner of Income Tax may require taxpayers to provide a guarantee as a condition for deferring payment. Any such deferral of payment will be discontinued and the tax debt will become recoverable where, for example, assets or businesses are sold or where the taxpayer becomes insolvent or is wound up.

Grahame Jackson draws attention to the fact that although tax returns do not make provision for Exit Tax, a taxpayer will be expected to contact the Commissioner of Income Tax before the relevant event and enter into a “period of negotiation”.

The next three webinars will cover the following. If you wish to register, please email nic.parrington@hassans.gi. 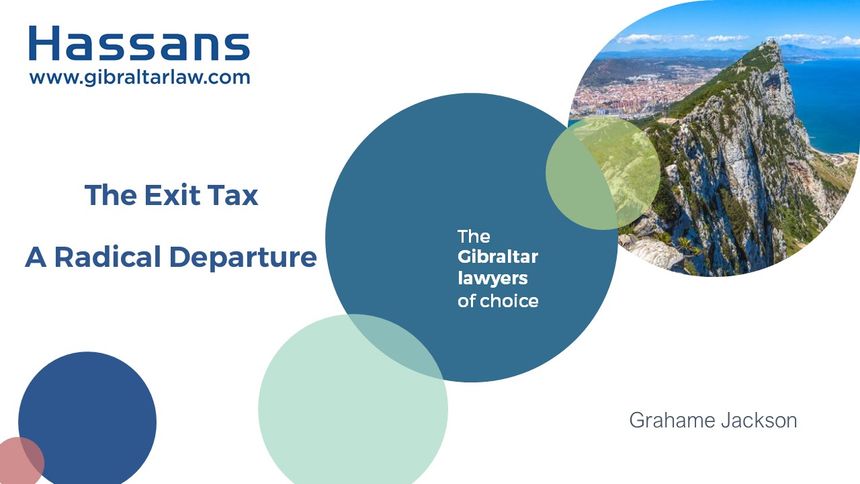